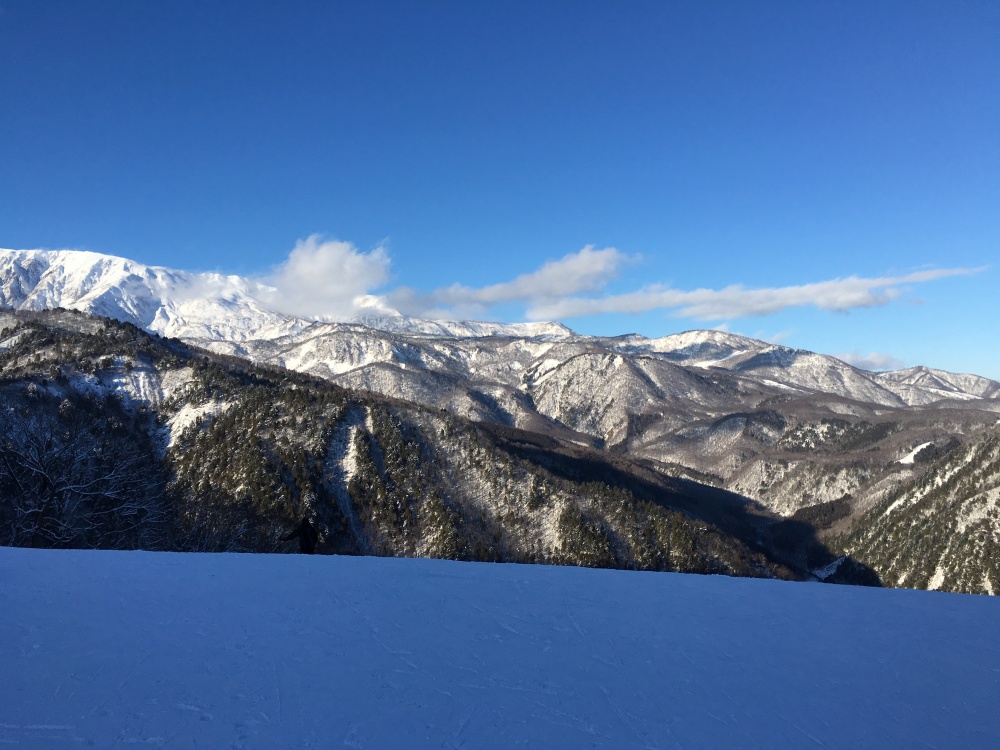 Over the holiday break, our family took our very first Japanese road trip up to Nagano, to go skiing at the world-renowned Hakuba slopes, which hosted Olympians a few decades ago. We packed up our brand new (to us!) Honda Mobilio with ski and sledding gear galore and set off on New Year’s Eve for the four-hour journey north.

I’d booked the trip last-minute, which meant there were only two rooms in the tiny town of Hakuba available. I chose the cheapest of the two, which was also closest to the slopes, and didn’t think twice about it.

Until we arrived, and it was closer to an abandoned murder hostel. My Better Half wanted to text people our location, just in case we didn’t make it out alive.

I’m usually firmly in the “we’re not going to be spending any time at the hotel anyhow” camp, but Murder Hostel was a bit much, even for me. We unpacked our luggage into our tiny, two-twin bed room, and set off for adventures… while we could.

Hakuba was the tiniest little town, not at all what I expected from one of Japan’s largest ski areas, which probably reflects my American mega-mentality. The reason there wasn’t a plethora of hotel rooms available was because all of the hotels were a small, boutique type quality. There wasn’t one enormous Marriott or Hilton-type hotel in sight.

We made our way down to the main part of town, where MBH had discovered an
après-ski pub, and we ordered your typical Japanese fare of pizza, burgers, and edamame to celebrate our early New Year’s. MBH had champagne on ice back at Murder Hostel (read = sitting in our sink, surrounded by outside snow we’d smuggled in. SUPER classy, we are) and we went back through the newly falling snow around our son’s bedtime for an early night of champagne, twin beds, and Japanese television, on the tiny TV affixed to the ceiling of our room. 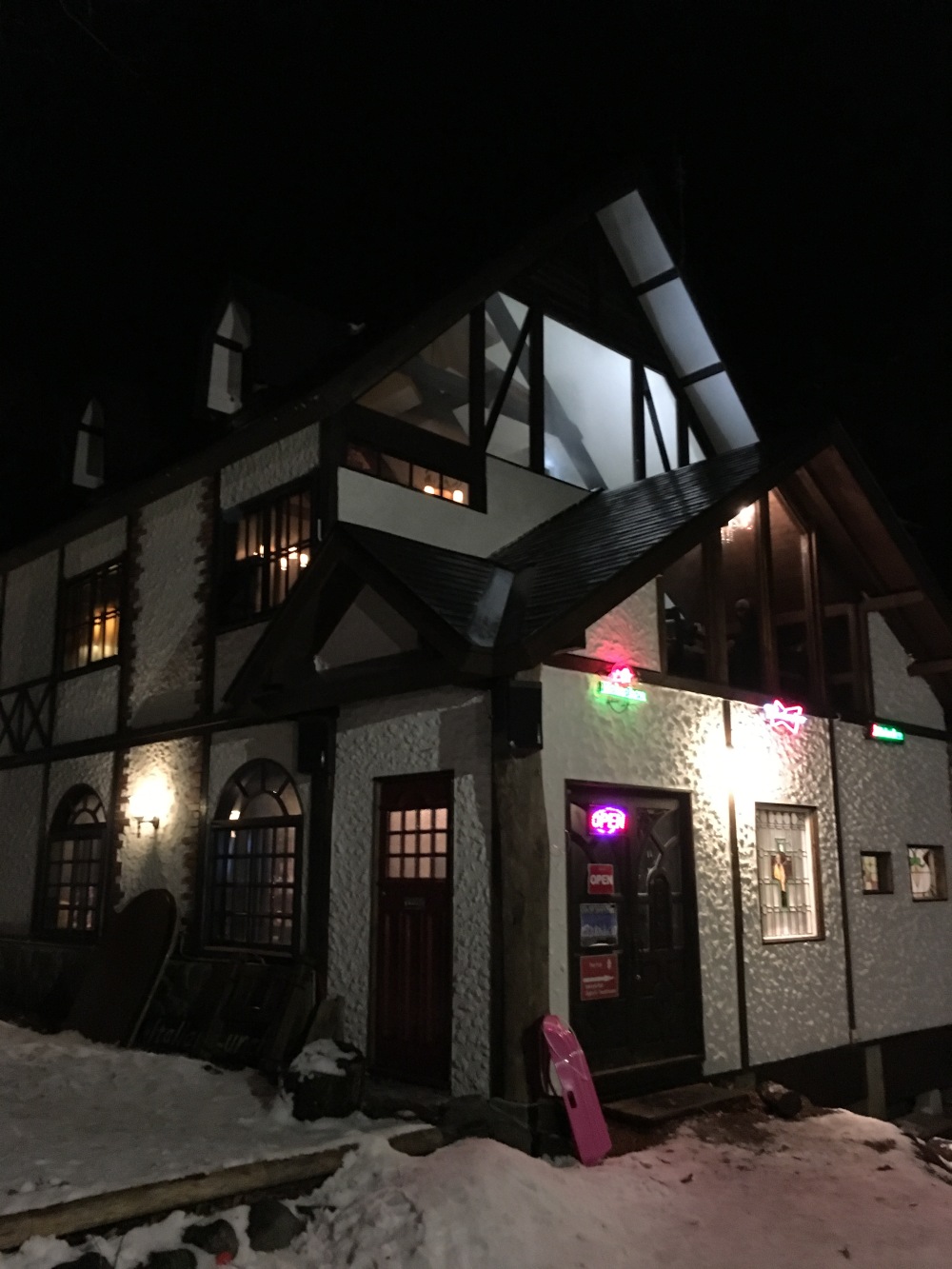 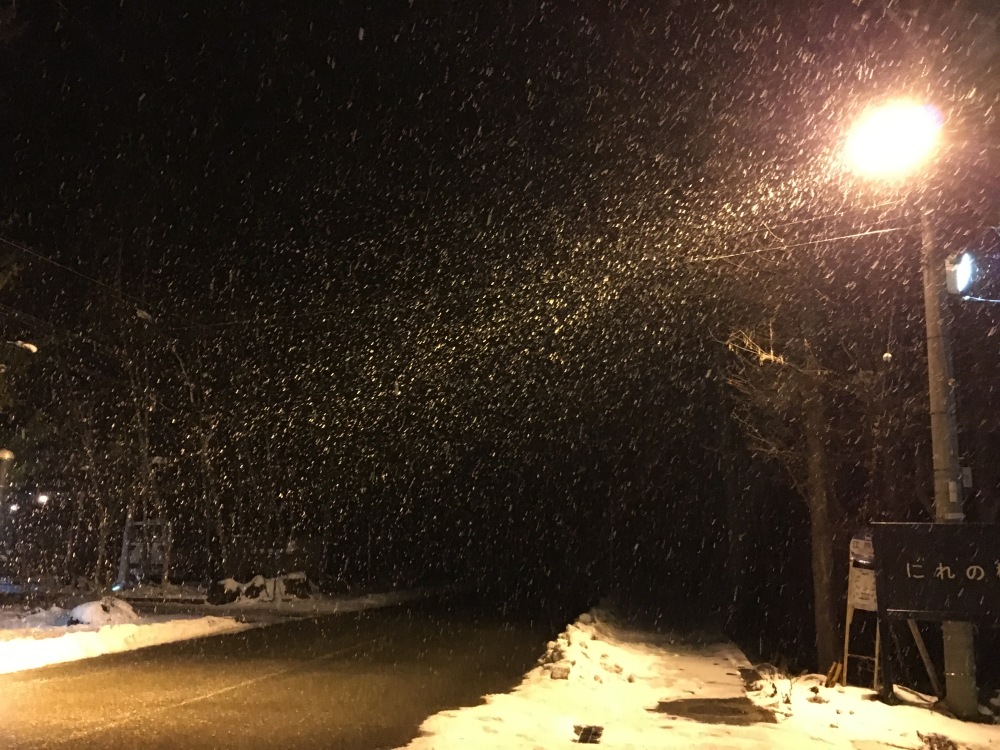 The next morning, we woke up bright and early for skiing! We’d made reservations for our son at the onsite daycare for the only day they had a spot available. After a lesson learned on parking before I know EXACTLY where to go (turns out, the daycare was another mile up the road), we got our son settled (read = packed off screaming. Don’t worry. He’s always fine two seconds after we leave) into the daycare with the super sweet Japanese ladies, and trekked up to the slope to practice. 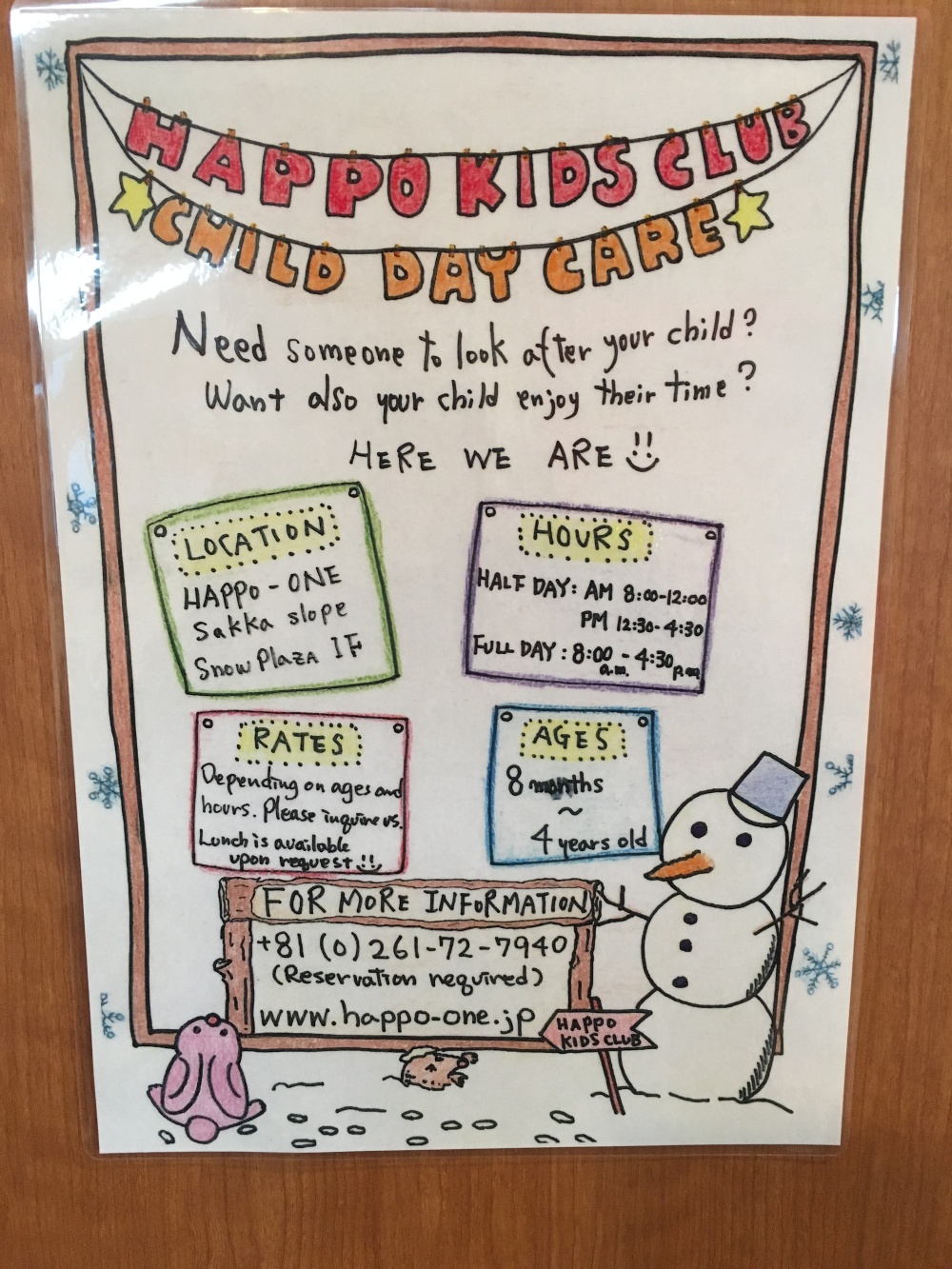 I’ve been skiing a few times before – most notably in the Austrian alps at another famed Olympic ski town. That’s the part I tell people. The part I don’t normally tell people – even MBH – is how terrible I am at skiing. I am happy to go at a snail’s pace down the bunny slopes for the entire day. Children whiz me past left and right and that’s ok. I’m more than fine with that.

All this, though, was an unwelcome surprise to MBH, who had a moment of real panic when I fell a bajillion times just practicing and tearfully declared “I hate skiing!” before we’d ever even gotten on a ski lift. To his immense credit, he calmly forced me to practice a few more times, promised me hot chocolate during lunch, and coaxed me onto the ski lift, where he said he wouldn’t leave my side for the first few runs, and said if I was really terrible, we’d just get me lessons, and that was that.

I tentatively got onto the ski lift, and we climbed higher, higher, and higher, until I was absolutely terrified and sure I would plummet off the side of the (super tall, super scary) mountain.

But true to MBH’s word, he got me safely down the bunniest of bunny slopes, to where another ski lift was running to take us up to the next set.

This is where trouble set in. I have mentioned that I’m not the greatest skier. This includes not being the greatest at simply standing still on skis, waiting in line for the ski lift, on an uphill angle. I decided for everyone’s safety (read = mostly my own) to unclick from my skis and trudge through the lengthy line until I reached the plateau where the snow evened out.

In theory, this was the perfect plan.

In practice, what this meant was that when I tried to put my skis back on, it didn’t work. I simply couldn’t click in, no matter how hard I stomped, how much weight I threw on the back of my heel, or how desperate I was becoming. MBH at this point refused to meet anyone’s eyes as he tried his best to help. Nothing worked, and the legions of people behind us in line were shuffling around me awkwardly, waiting for me to realize the polite thing to do would have been to step out of line until I fixed it. I never did realize that, too panicked about why this was happening to me.

At last, a Japanese man next to me stepped in, stooped down, and sized my ski differently, knocking off the snow and ice that had accumulated in the grooves of my boot during the wait. The Japanese are notoriously reserved. Even eye contact can be considered rude. I know all this, and I still considered throwing my arms around him and giving him a kiss. I definitely teared up behind my goggles as I thanked him profusely.

At last, we made it on to the lift (again) and up the mountain. Given the events of the morning, MBH decided to stay right by my side the entire day. I was ecstatic not to be left alone to the mercy of the ski lifts.

And happier still to be back safely in the ski lodge, hot chocolate in hand.

On our last day in Nagano, the ski slopes were closed due to lack of snow, which meant the kid’s area with sledding was also closed. We trekked off in search of a snowbank deep enough we could at least get a couple runs with our son in and put his rented snow gear to good use. 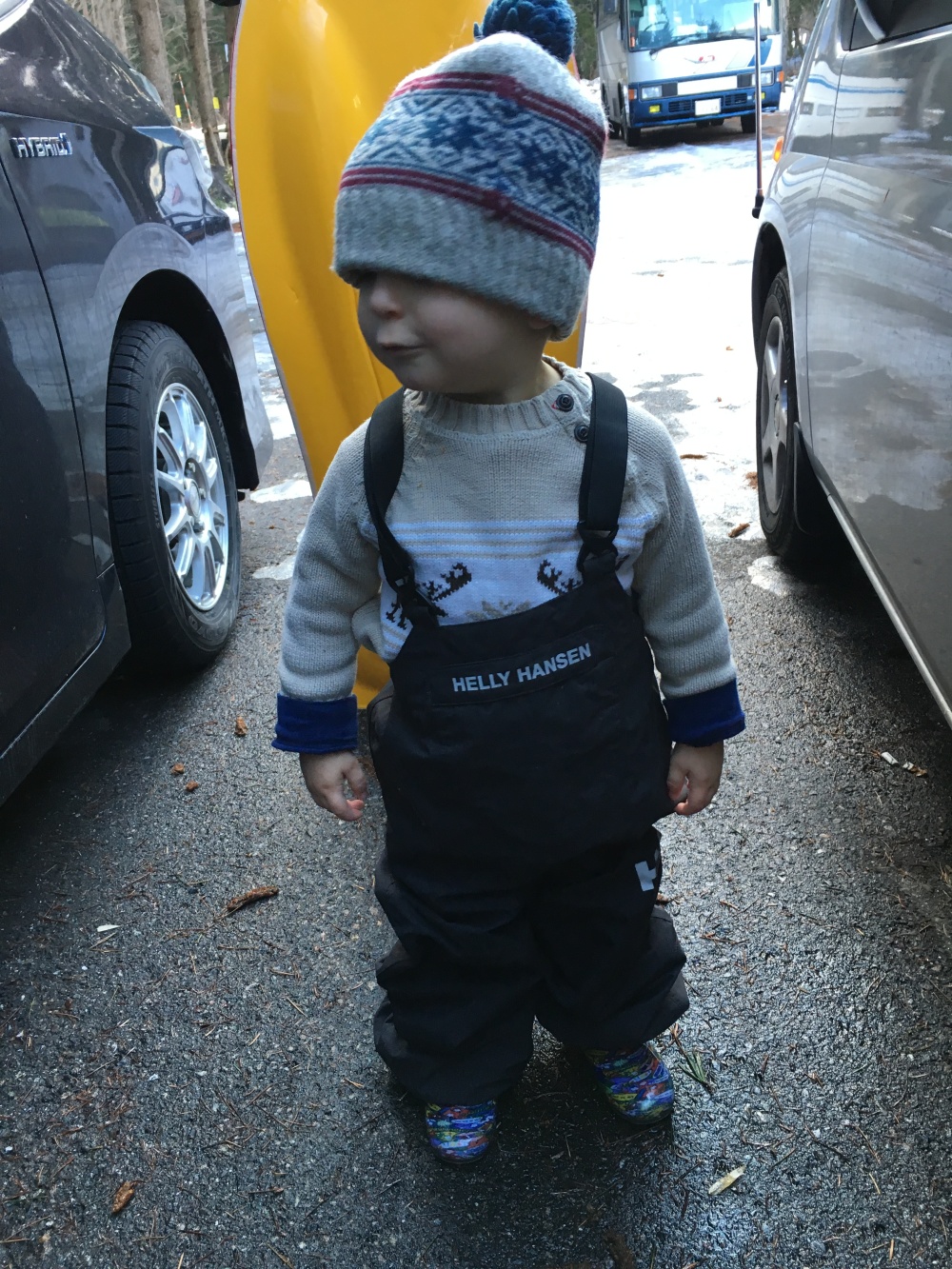 We found the perfect snowbank, set him up on his little sled, and he immediately jumped off. Again and again. For a baby born in February, who has had snow on each of his birth days, this kid does not like the cold.

We finally gave up, packed it in, and strapped in for the drive home!