On a rainy Saturday, our whole family set off for something relatively ‘indoors’ to do, since the typical Okinawan weather lends itself mostly to a variety of outdoor activities. I finally landed on Okinawa World, home to the Gyokusendo Cave, an enormous underground masterpiece nearly more than a quarter million years old.

Underground sounded pretty much the same as indoors to me, so off we went.

I expected a cultural theme park to be slightly cheesy but from the moment we arrived, Okinawa World completely exceeded my expectations. We pulled up just in time for the Habu Show – billed as EXCITING. AND. THRILLING. 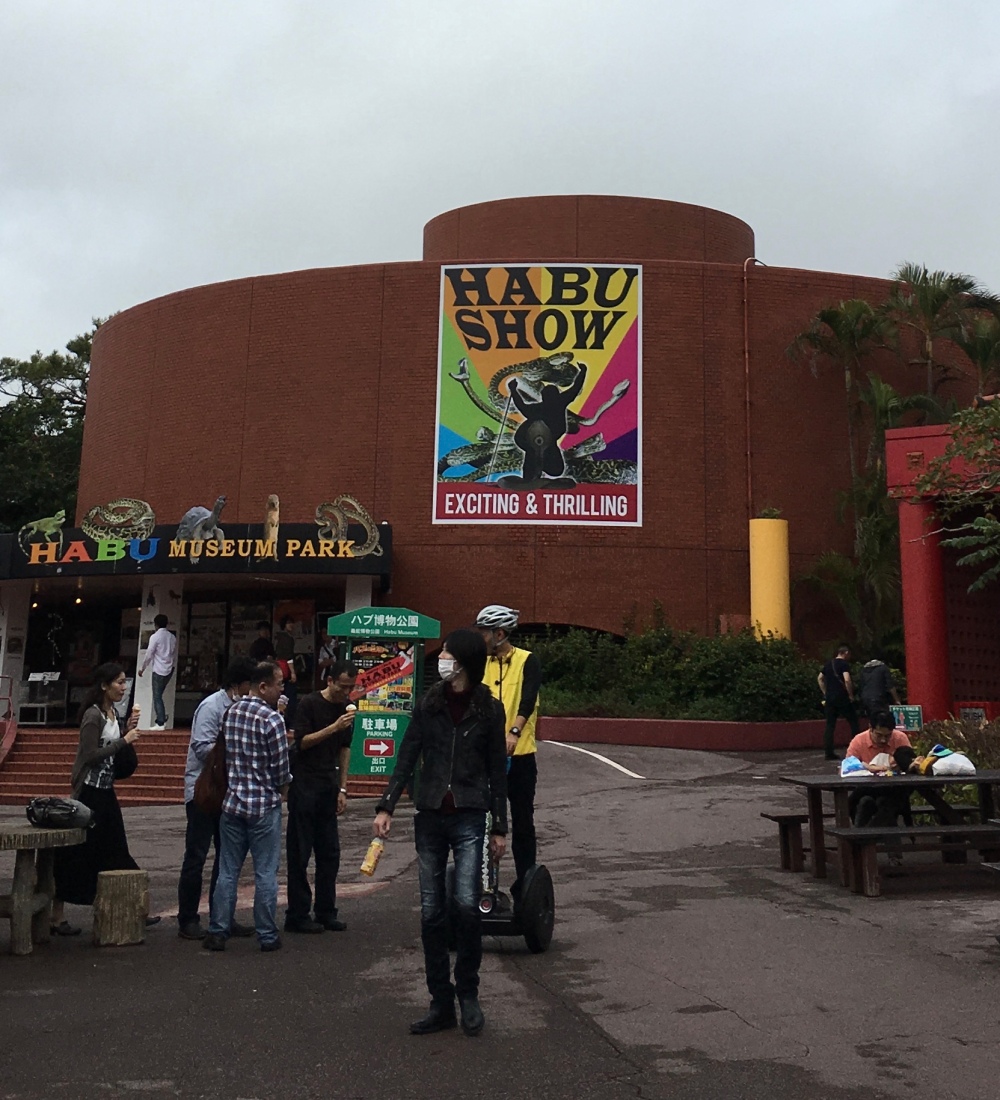 We obviously couldn’t pass it up.

Inside the Habu museum, we learned facts about these snakes, which thrive in Okinawa. Like the fact that they are the creatures of nightmare, with a 360 degree striking distance, making them far more maneuverable and bitey than a cobra. 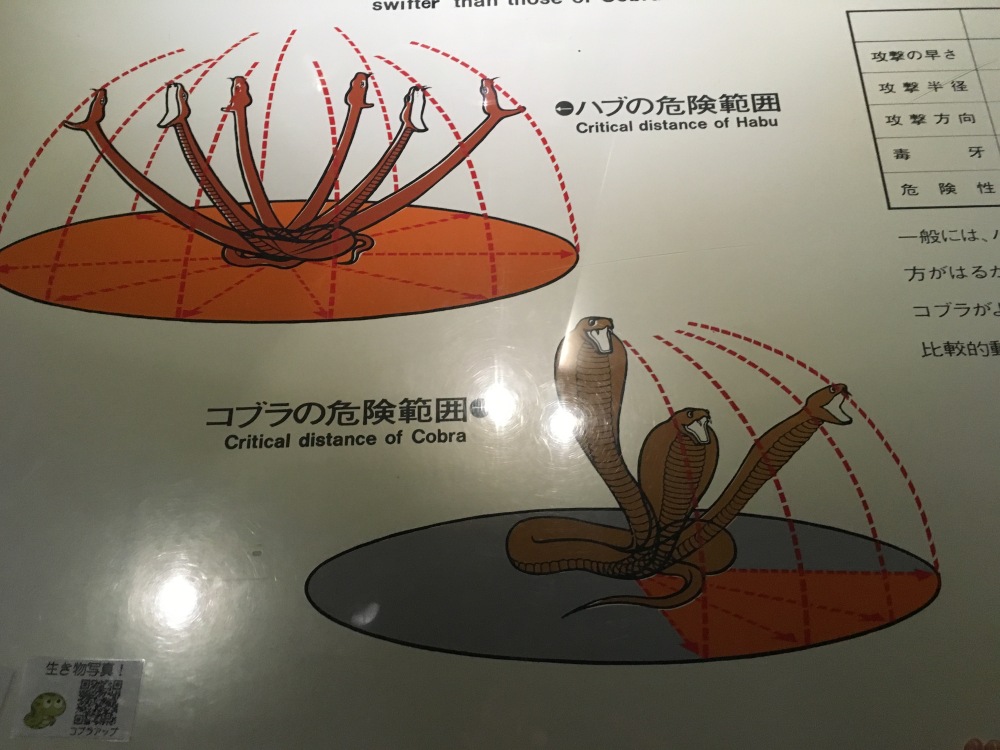 At the Habu show, we were provided English translation via headset, which we turned on just in time to hear their (sarcastic?) safety warning: “If the snake gets loose, flee. If I flee, flee. If the Habu bites me, please come save me, then flee.”

The show imparted important facts about Habu, such as exactly how long their fangs are when they sink into you.

And which will win a swimming race: a Habu or a mongoose?

I thought this would be scary for our son (just seeing a photo of a Habu in the wild pre-trip was enough for me to discount hiking from our list of activities) but he was rapt. 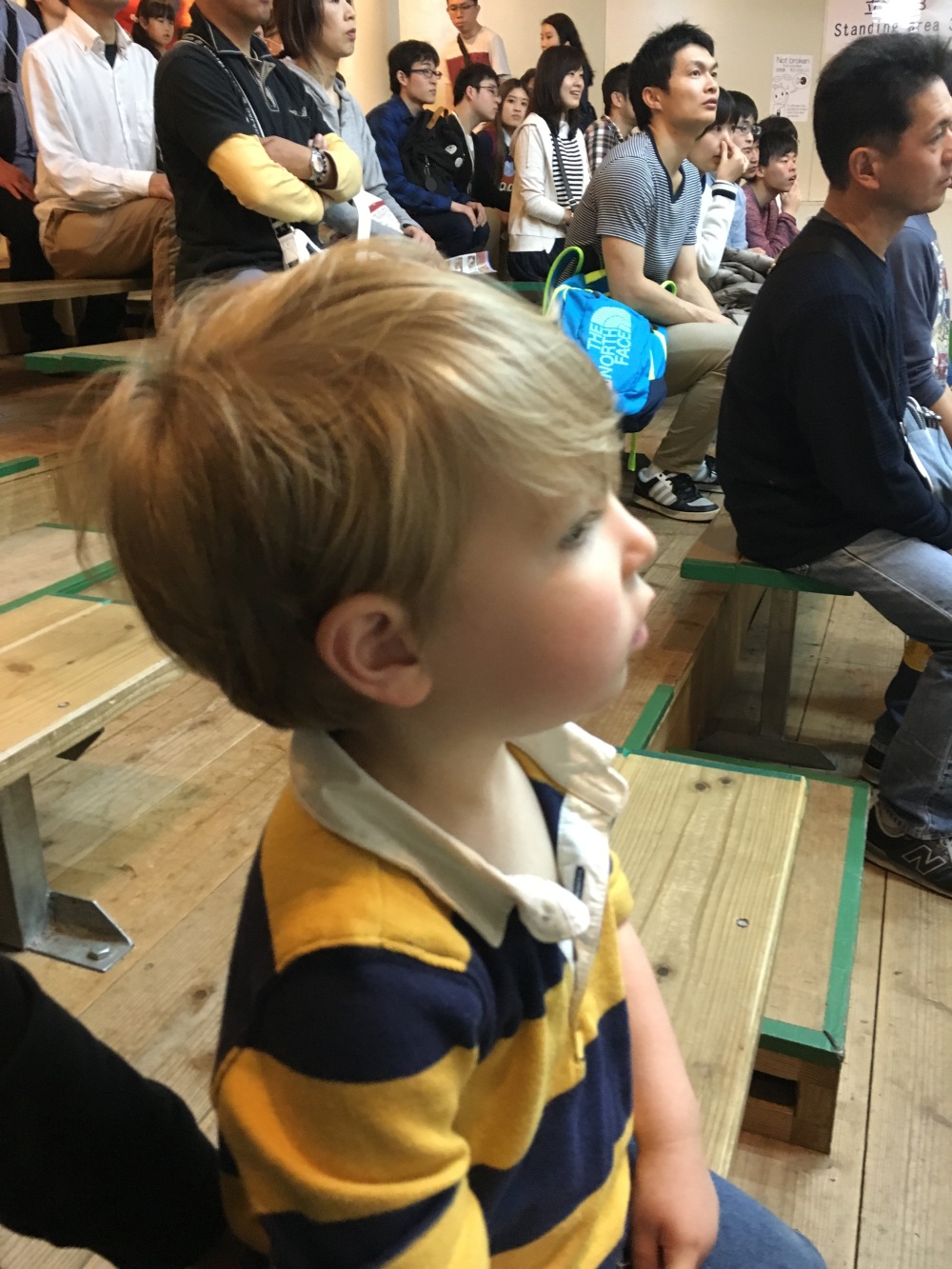 So rapt, that when the Habu handler demonstrated how Habus can sense warm-blooded animals approaching by demonstrating with balloons filled with cold & hot water… my son was the only audience member who didn’t realize what was about to happen.

The Habu handler brought the cold water balloon close to the Habu, with no reaction whatsoever. He tapped it on the head, he bounced it all around its face, and the Habu didn’t even flinch.

As he slowly brought the hot water balloon closer, however, the Habu immediately reared back, struck, and the balloon shattered with a loud POP!

I wish I had video of our son’s reaction. He leapt back from the bench he was sitting on, ran behind me, and loudly shouted “No, no, no, no, no. Done!”

At that point, we became the show, and the audience cracked up as our son kept to his word. He was done with Habus and done with the show. I picked him up and crept to the back of the room, cradling him until the show finally ended.

Outside, there were more Habus and other creatures to see, including Habus hiding in trees and giant tortoises. 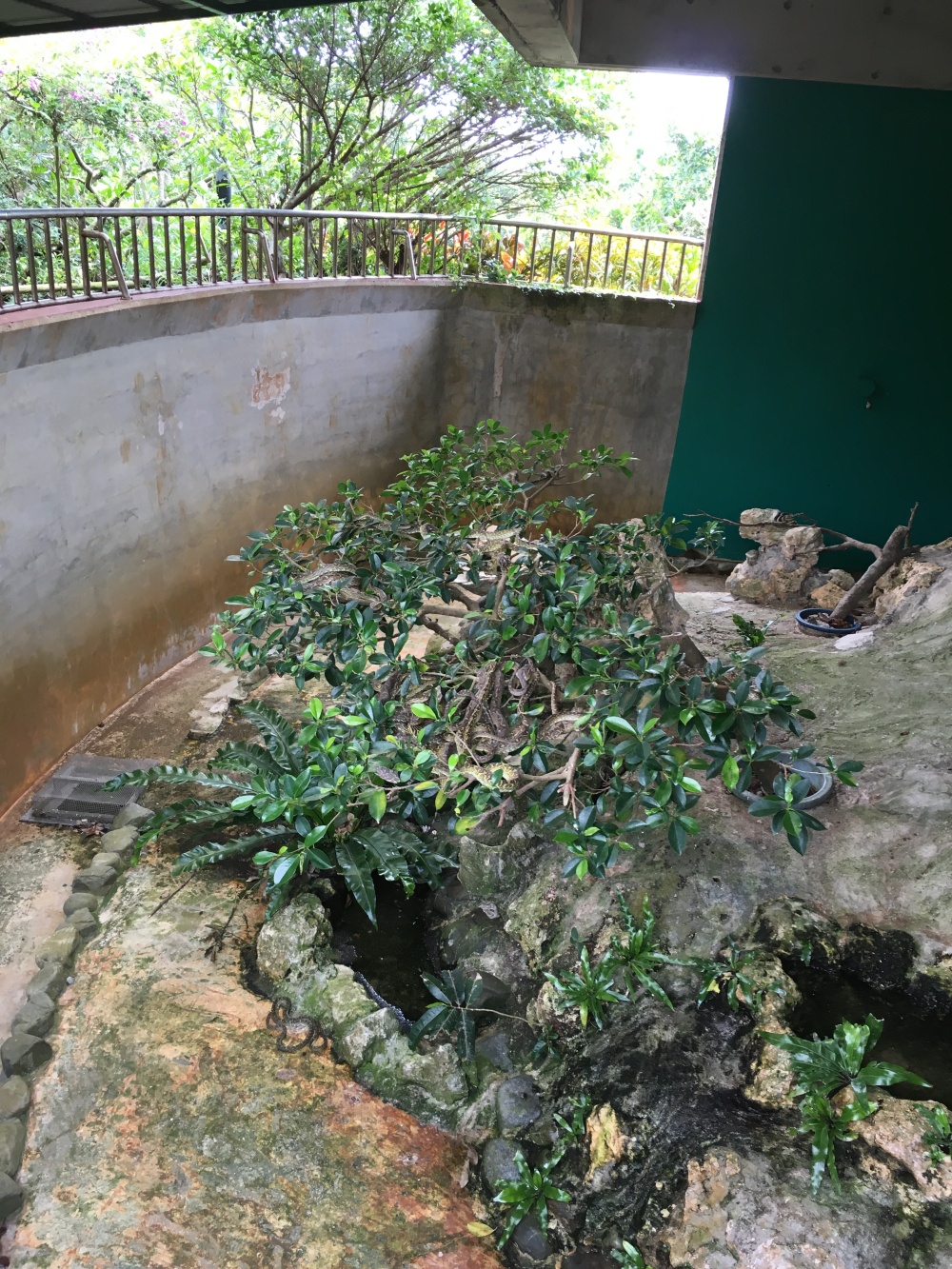 Then it was time to explore the caves!

I expected possibly one or two caverns, maybe 10 minutes of activity, tops, but once we were underground, the cave kept going and going. 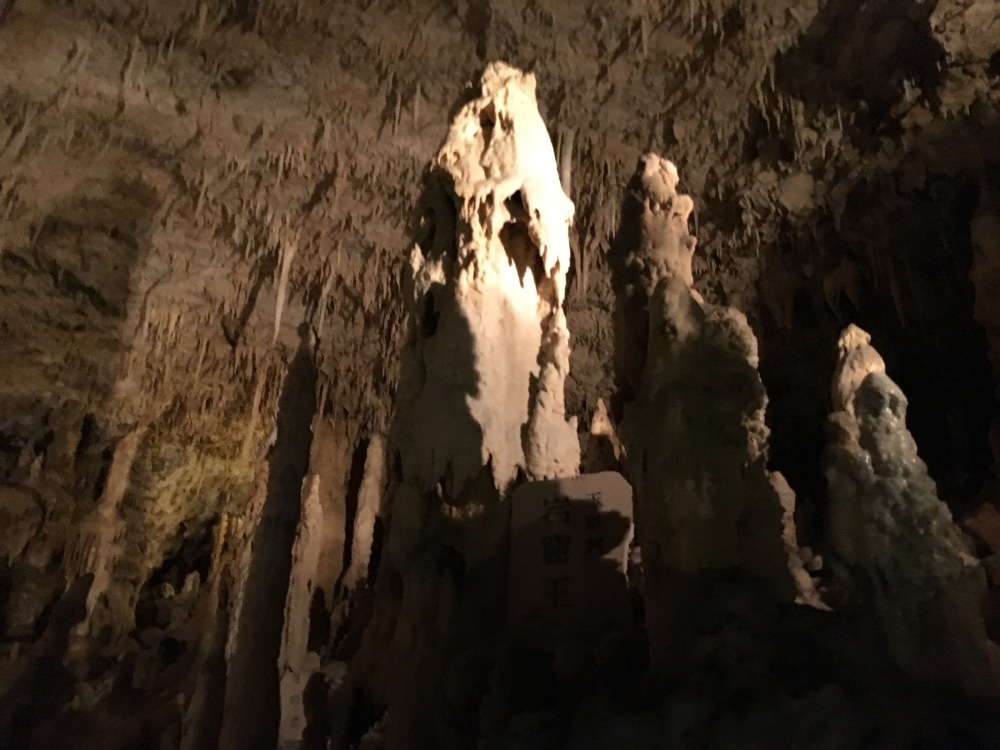 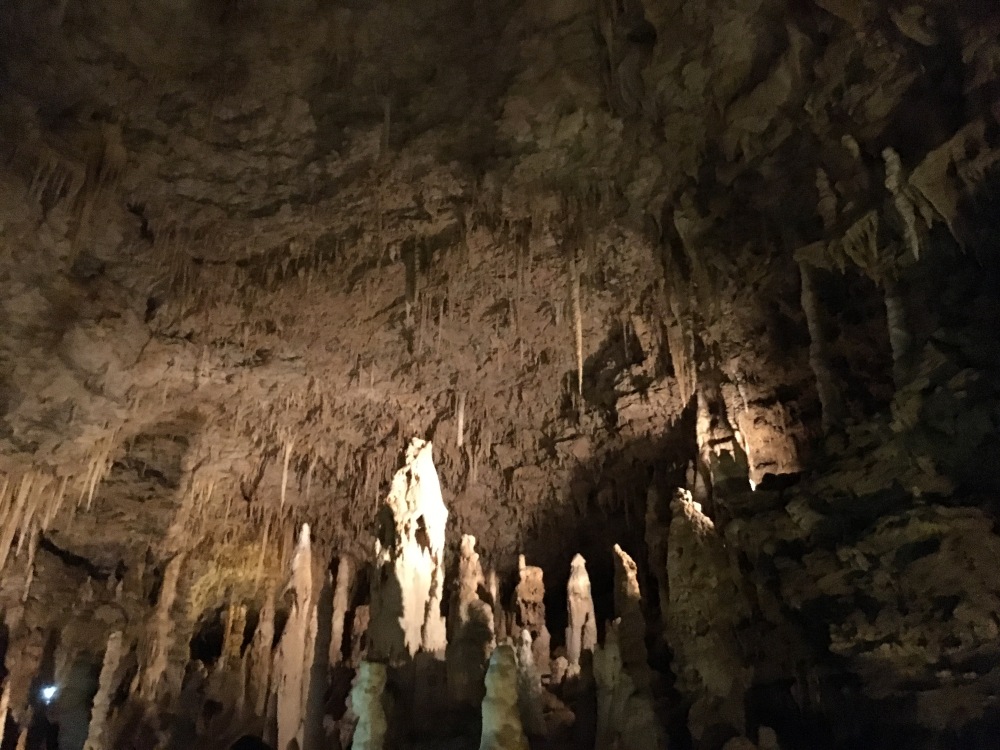 Some of the stalactites were so close you could touch them, although I didn’t… because of course I’d touch one and the entire cavern would start to collapse.

Some of us were more excited about how close they were than others. 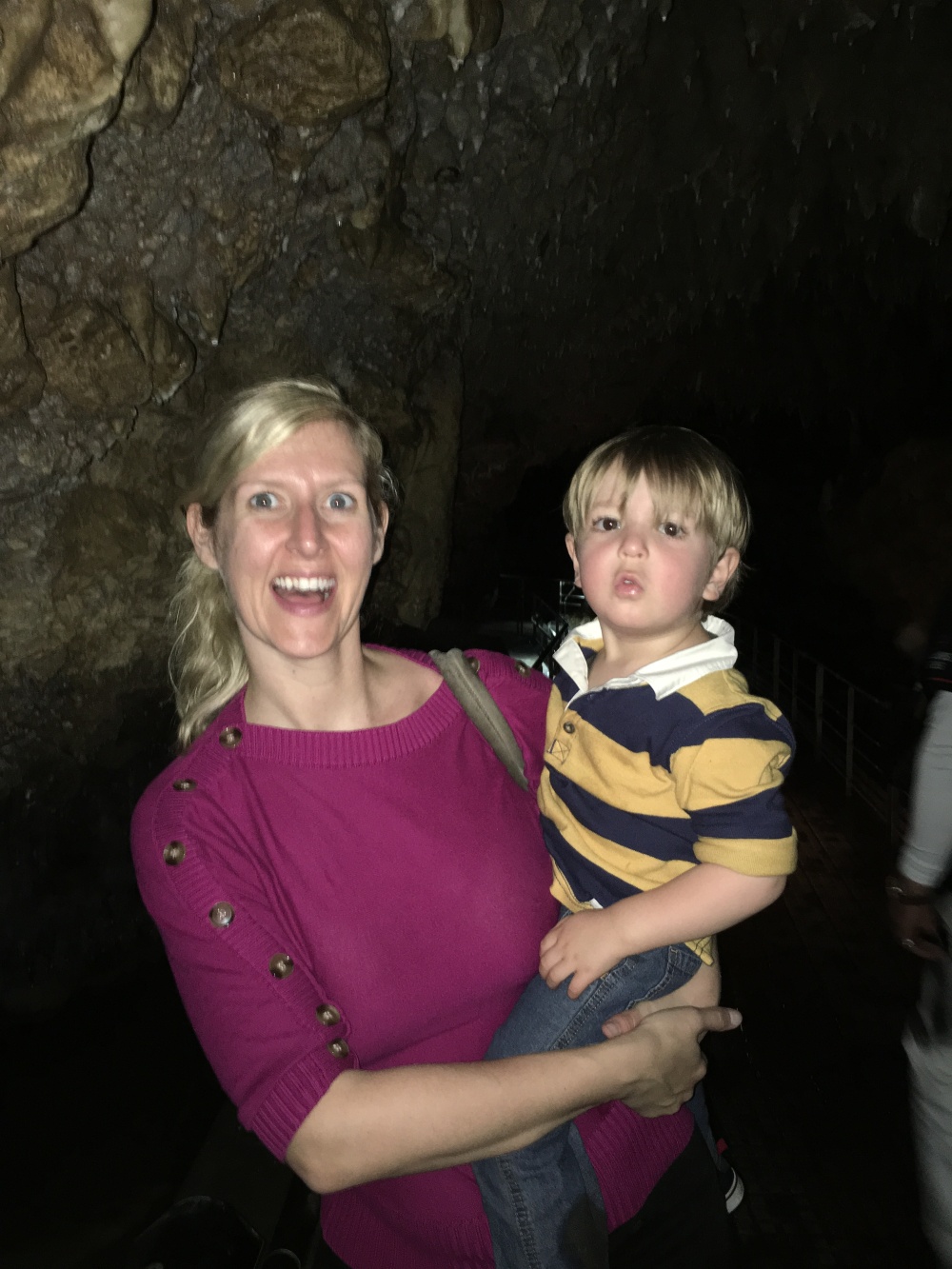 After we came up from the caves about 40 minutes later, we were on the entire other side of the park, which was set up like a traditional Okinawan village, with craft activities like glass blowing, and a reflexology walk.

A few steps further, and we were in the brewery. Everything looked ordinary, very brewery-esque… 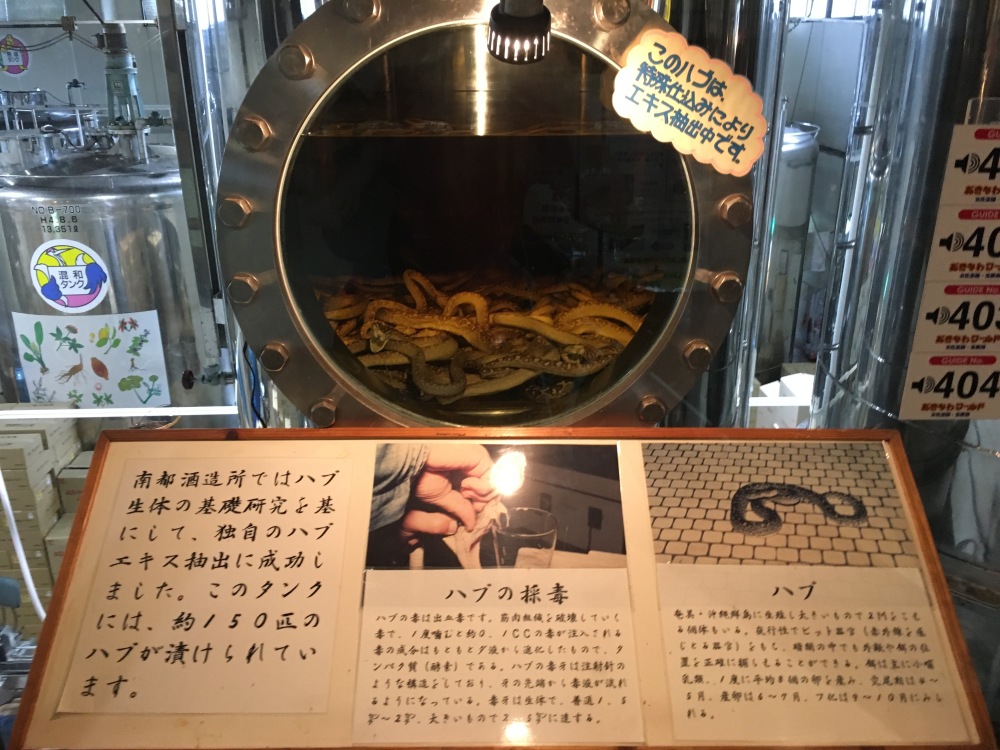 Of course we had to buy some to bring home, although we haven’t tried it yet. We’ve been told, however, that it tastes exactly like you’d expect it to taste, given that it’s been marinating a dead reptile for months on end.

Okinawa World ended up being one of my favorite things we did on the island. We saw some traditional dances, learned Okinawan history, explored natural caves, and came home with some snake sake. And, we came across my very first example of Engrish, which made my heart happy. Although the vast majority of their signs were perfectly translated, this one was joyfully not.

Okinawa World is worth the inexpensive ticket price, and friendly for all ages, although strollers weren’t advisable in the caves due to the number of steps. The ticket counter is cash only.